In the video below, Louis Oosthuizen explains how the red dot on his glove helped him win the 2010 Open Championship.

The moment that Louis Oosthuizen became the deserved 2010 Open Champion at St Andrews was probably one of the most amazing examples of mental toughness in sport, let alone golf.

Peter Alliss made the remark on commentary how Louis appeared to look at a big red dot on his glove before EACH shot and then go into a trance-like state!

About a month before the Open, I was called up by Chubby Chandler at ISM to work with Louis on his concentration and MIND FACTOR.

We sat down for the first time in Manchester and talked. It was clear his routine was all over the place. He had all of the pieces he needed but in completely the wrong order.

Most golfers just do NOT understand how important and how vital it is that you get your routine right. You need to know HOW to put the pieces together.

Concentration is one of THE most misunderstood aspects of golf and life!

Nobody ‘loses’ their concentration they just allow themselves to put it in the wrong place.


One of the difficulties of golf is there are no outside agents which help you focus your concentration – unlike, for instance, football, where the referee’s whistle will trigger the mind to focus on the game. In golf, it is essential you create your own ‘concentration trigger‘.

The red dot on Louis glove that he looked at before each shot acted as a trigger to begin a pre-planned ritual that kept him totally focused on the shot at hand.

So rather than allowing his mind to go off and worry about the outcome of the tournament, Louis had a system to get himself back to focusing on the TASK of the shot.

Did you notice how Louis actively seemed to be smiling and enjoying himself? This was a specific step we discussed. The RED DOT became the focus point to play the shot and then he would ‘come out’ of that state of focussed attention in between shots.

Switch concentration on for the shot… then switch it off in-between.

If you think you’d benefit from taking these ideas further in your game, all of the secrets to the kind of routines that Louis worked on can be found in my MP3 programs:

Do you use a concentration trigger? If so, tell us about it below!

Ps – And if you want the full blueprint to a world class pre-shot routine, look no further than my Players Programme Deluxe.

Is Your Mental Game Costing You Strokes?

Find out in the Mind Factor report, yours FREE when you join our email newsletter 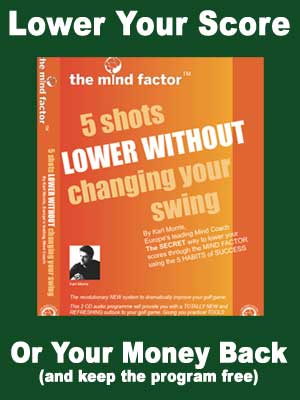 About The Mind Factor

The MIND FACTOR is a proven and practical approach to improve your golf mental game, by Karl Morris.

Mind Factor International is a trading name of Cogmentis Ltd, who are the official publisher for the Mind Factor outside the UK.

For customer support or pre-order questions, please contact us online or email us at:

We use cookies to ensure you get the best experience on our website, including personalisation of ads.Privacy PolicyOk